Without a doubt, NASCAR racing is among the top sports in the US nowadays. Believe it or not, it gains thousands of new followers every week. It’s so popular that you can bet it on different platforms whether online, after you download Mega888, or from the traditional bookmakers. As for those who are new to this sport, here’s a brief intro.

NASCAR stands for National Association for Stock Car Auto Racing. It’s a sanctioning body that is overseeing several kinds of auto racing across the country. The top 3 series under NASCAR are:

On the other hand, when most talk about NASCAR, they’re basically referring to NASCAR Sprint Cup Series. 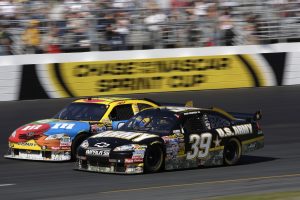 NASCAR Sprint Cup race car of today only has a passing resemblance to its stock heritage. The cars are built from scratch to make it a pure racing marvel. These vehicles are based on 4-door American made cars like for instance, the presently eligible race cars are:

With NASCAR Sprint Cup Cars, it has fenders which play an important role for it allows side-to-side contact between other cars without letting the wheels hook that can cause a wreck in the track. Sprint Cup Car normally weighs at around 3,4000 pounds with a wheelbase of 110 inches to be precise. The engine on the other hand is a 358 cubic inch V8 that can generate 750HP.

These days, NASCAR Sprint Cup series do feature 22 different tracks and 36 races. 34 out of those races are featuring D-shaped race tracks or all left turns on ovals. The other two races are hosted on road courses. As for the tracks, it differs in size from a small .526 mile in Martinsville Speedway to the massive 2.66 miles Talladega Superspeedway.

The largest Sprint Cup race is the Daytona 500. Some other known races are Brickyard 400 at famed Indianapolis Motor Speedway, August race at Bristol Motor Speedway, and Memorial Day Weekend Coca-Cola 600 at the Lowes Motor Speedway near Charlotte, North Carolina.

A few of the biggest names in NASCAR are Jeff Gordon, Jimmie Johnson, Dale Earnhardt Jr., and Tony Stewart. Legendary drivers of the past include Richard Petty, Dale Earnhardt, Darrell Waltrip, and Bobby Allison. Mario Andretti and AJ Foyt each ran few races in NASCAR tracks. Truth is, they’ve won Daytona 500 but they’re popularly known for their accomplishments in open-wheel racing.